After three months of work, the first section of the new westbound reserved lane along Route 116 (VR-R116), on the territories of the cities of Saint-Basile-le-Grand and Saint-Bruno-de-Montarville, was commissioned on November 16, 2015.

This is the first of two sections to be completed as part of the VR-R116 project, which is 100% financed by the Ministère des Transports du Québec (MTQ).

In addition to resurfacing the right shoulder and widening it in some sections, we added new road markings, installed new signage, reconfigured a few intersections and incorporated a multifunctional link between de Boucherville and du Millénaire boulevards.

It should be noted that dialogue with the business owners and citizens of the cities affected by this project was maintained throughout the duration of the work.

Plan for the reserved lane

Place your cursor on the plan for more details. 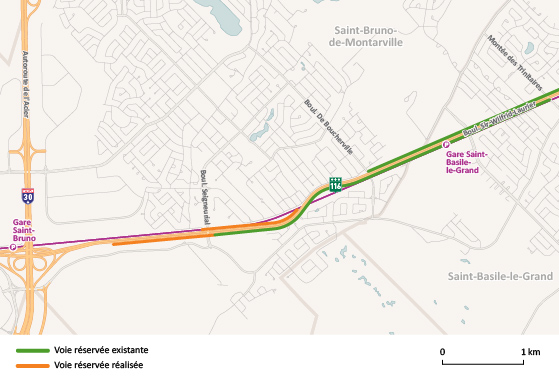 Let us note that this new reserved lane along Route 116 will improve access to downtown Montréal and ensure the reliability and punctuality of public transit service from the Route 116 corridor on Montréal's South Shore.

It is estimated that carriers will save $121,000 in annual operating expenses.

The project consists in implementing a reserved lane on the shoulder in both directions, for a total of 8.1 km, and in developing a multifunctional link between De Boucherville Boulevard and the Saint-Basile-le-Grand train station south of Route 116.

Only buses and cyclists will be allowed to travel on the reserved lane.

The work on the second section of the eastbound VR-R116 toward Mont-Saint-Hilaire will be performed in the spring and summer of 2016. This section will connect to the existing reserved lane on Seigneurial Boulevard in Saint-Bruno-de-Montarville, and will end at Montée Robert, in Saint-Basile-le-Grand.

Motorists are invited to consult the Québec 511site to find out how the work will hinder traffic.