The public consultations are now closed

Thanks for participating! See the full consultation results.

In 2023, exo will implement an improved bus network in the Chambly-Richelieu-Carignan, Le Richelain and Roussillon sectors.

Discover the details concerning your sector

Exo listened to you!

To develop this network, we held public consultations in 2019 and 2020 to understand and better meet the needs of these sectors.

Here you will find the archives concerning the approach and the results of these consultations.

In 2023, exo will launch an improved bus network in the Chambly-Richelieu-Carignan, Le Richelain and Roussillon sectors. This new network is being developed to better meet user needs, taking into account the comments received during public consultations.


Benefits of the new and improved network

Discover the benefits of the new and improved network for Chambly-Richelieu-Carignan, Le Richelain and Roussillon. 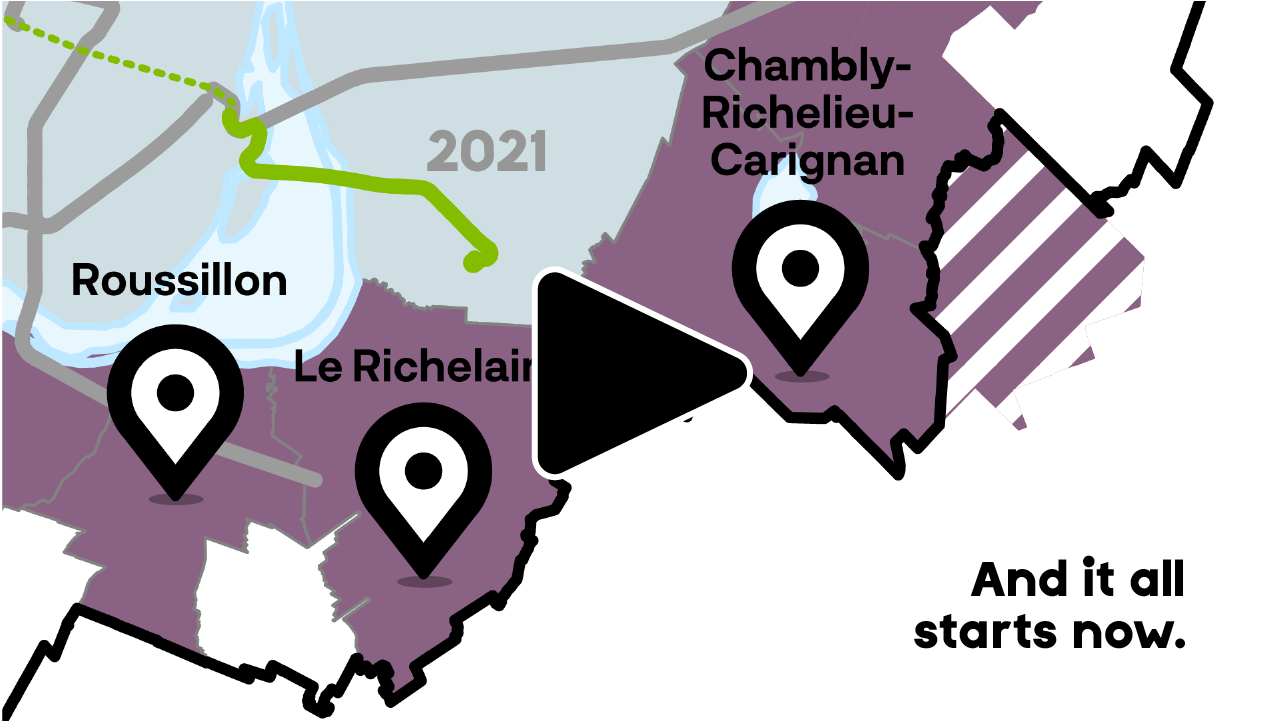 Presentation of the proposed network

We have prioritized the review of our network in these sectors in order to align our services with the launch of the Réseau express métropolitain (REM) on the South Shore.

The REM’s South Shore segment will link Montreal’s Central Station to the Brossard REM station. At that point, our buses will no longer have access to the Samuel-De Champlain bridge.

Our buses will link the sectors of Chambly-Richelieu-Carignan, Le Richelain and Roussillon to the REM.

Exo invited people affected by these changes, i.e. stakeholders including users, citizens, local organizations, partners, and elected officials, to participate in the consultations through various activities such as surveys, consultation sessions, discussion forums, etc. These consultations were carried out in two phases.

Following this second phase of consultations, the new data we collected was compiled in a consultation report (in French) published in early 2021.

Updated schedules for the new network will be in place as soon as the REM opens on the South Shore. These revised schedules will be announced ahead of time so users can plan their new routes. Exo has a plan to help guide you through these changes.

Changes to rates are part of the fare reform project, which is the responsibility of the Autorité régionale de transport métropolitain (ARTM).

The ARTM is currently redesigning the rate structure for all of Greater Montreal in an effort to simplify it.

Learn more about the fare reform

Yes. The new bus network will provide better east-west service. We’re planning to better align our services with those of the Réseau de transport de Longueuil (RTL) in order to facilitate travel between regions. The REM terminals will be ideal for transfers between the two networks.

Our operations teams are monitoring the ridership for each route to ensure we select the right type of bus.

We are constantly improving and will continue to improve our facilities based on customer needs and available financing.

To learn more, visit the page dedicated to the launch of this network.

Exo hopes to see more of this infrastructure developed to provide you with speedier service. Creating reserved lanes involves several partners, including municipalities and the ministère des Transports du Québec (MTQ), depending on the location. We actively collaborate with our metropolitan partners to prioritize reserved lanes as they contribute to making public transit more efficient and appealing.

Yes, certain taxibus lines have been replaced by bus service, while others have been added or remain in service.

If you would like to know more about schedule changes, exo has a plan to help guide you.

Yes, boarding and disembarking outside the territory we serve as well as transfers to the REM, STM and RTL are permitted, depending on your fare. To board an exo bus and travel into RTL or STM territory, you must hold a transit fare that is valid in Zone C and Zone D.

Learn more about the fares and fare zones valid for travel in exo’s territory.

As for exo bus stops in RTL territory, stay tuned! Exo has a plan to help guide you through these changes.

Our buses serve some 60 municipalities on Montreal’s North and South Shores, most of which are located in the Montreal Metropolitan Area, and some of which are outside this territory, such as Saint-Jean-sur-Richelieu.

Exo does not have the power to modify its coverage area. This is the responsibility of the Autorité régionale de transport métropolitain (ARTM), which is in charge of public transit planning, financing and fare pricing in the metropolitan area.

Good to know: The hospital, the cegep and the military college will be directly served by the proposed 685 line.

As soon as the REM opens on the South Shore, our buses will no longer have access to the Samuel-De Champlain bridge. To get to Montreal, you may use our bus services to connect with the REM, which can then take you to several Montreal destinations. Certain lines will maintain service to Longueuil hubs (metro), as well as to Montreal via the Mercier bridge. Some local lines will also be available, and travel between South Shore municipalities will be made easier.

As much as possible, local service has been configured in order to limit the amount of transfers required to access the REM. Several bus routes will directly serve South Shore REM stations as soon as they open in 2023.

A contingency plan is currently being developed alongside our partners (ARTM, REM and RTL) should such a situation occur.

Yes, Candiac station will be served by 2 bus lines: the present T36 and T37 routes have been slightly modified, and the service will be offered by minibus (lines 147 and 147). We have also added a new connecting line at Candiac station for the municipality of Saint-Philippe (line 135).

According to our data, the transit demand does not justify increased service to these destinations.

Access to this new station will also enable transfers to other exo services to serve more destinations.

Note however that service levels will evolve in the years following the launch of the new network based on changing demand.

Adding a taxibus line for the municipality of Saint-Mathieu was not prioritized in configuring the new network. However, if demand justifies it, we may create new lines in coming years once the new network is up and running.

Preliminary estimated travel times to the REM are displayed in the tables below.

To see the REM travel times, click on the station name:

These are preliminary estimates based on current data regarding anticipated traffic conditions. These estimates are valid for periods of traffic congestion, during morning rush hour.

The new route serving Richelieu and Marieville (C486) will stop at the Brossard REM station.

According to an agreement between the Autorité régionale de transport métropolitain (ARTM) and the Caisse de Dépôt et placement du Québec Infra (CDPQ Infra), as soon as the REM opens, exo and RTL buses will no longer have access to the Samuel-De Champlain bridge.

There will be no direct route. However, transfers are possible via the Brossard REM station.

Off-peak service will be aligned with the REM’s operating hours to cover the last arrival at Brossard station, at approximately 1 a.m.

Join our exo all ears community and you could win $100 by taking our surveys.

Learn more about exo all ears

Have a question about a project? Contact our customer service centre.